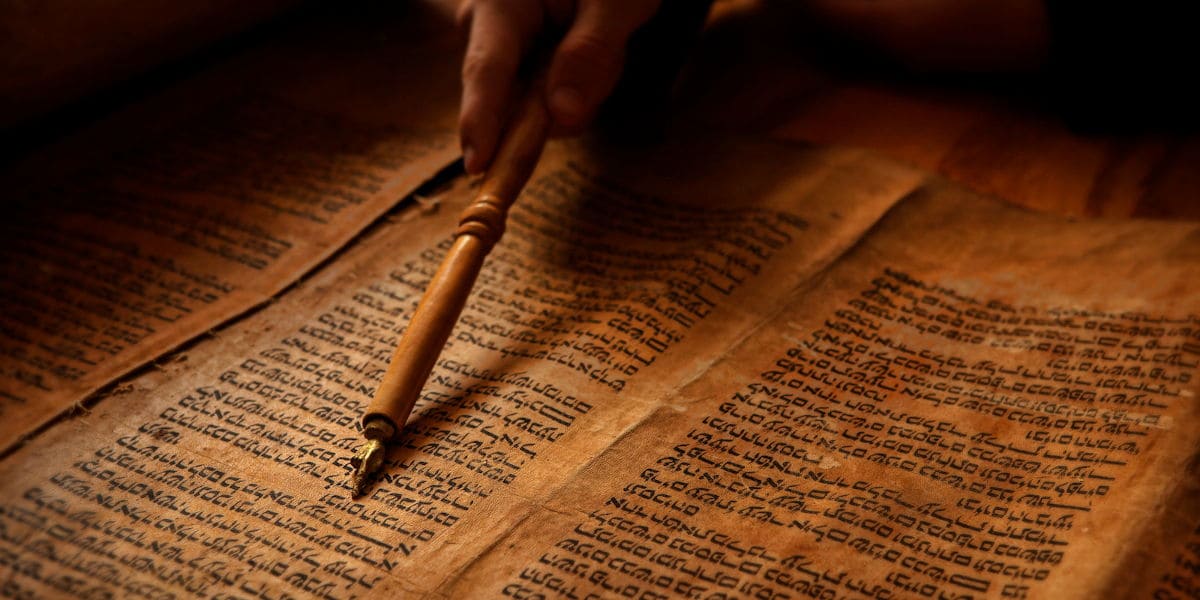 Revelation of one of the greatest secrets of our more than 2500 years old civilization, the first book of the Bible, the Book of Genesis, relates in its first chapter the story of Creation in 6 days.
The 7th day is reserved for blessing and sanctification.
Following extensive research and studies, the writing technique of the original Hebrew text of the Creation in 6 days has unveiled unknown structures of great intelligence and great technical sophistication.

The method of analysis is based on the sequencing and counting of words and letters according to a particular method that is the foundation of the discovery.
The text is divided into 6 days with 6 paragraphs corresponding to each of the 6 days.
However the secret code revealed by the text does not correspond to the division into 6 days but rather corresponds to a specific count based on the sequencing of the word “God”.

In the Hebrew text, the word “God” is the 3rd word from the beginning of the text and the number corresponding to the letters for these 3 words is 14.
With the transliterated Hebrew letters we have the sentence in the beginning, figure 1:

The entire text concerning the 6 days contains the word “God” 32 times, “ALEiM” in transliterated Hebrew (pronounced eloh-im), and for the 32 instances of the word “God” there is a total of 434 words and 1671 letters.
Continuing the count, the word “God”, or “ALEiM”, appears the 2nd time after 14 words and 52 letters. The 3rd appearance of the word “God” occurs after 6 words and 24 letters.
Then appears an enigma: the word “God” in 3rd, 4th, 5th and 6th positions is associated each time with 6 words. There are 4 times 6 words in a row and then the number 6 does not appear anymore.
It required 17 years of study to solve this enigma.

The Brasit Sequence continues and for example:

The last sequence does not end with the word “God”.
The sequence ends with day the 6th.

• 33rd sequence of 13 words, the corresponding number of letters is 41.

The initial analysis of the sequencing considering only the words is shown in figure 3 of the Beresheet Sequence.

To facilitate the general understanding, each numerical sequence has a graphical symbol that represents the corresponding action performed by “God”.
The 10 actions performed in the order of appearance in the general sequence are the following:

The 11th symbol is an action that does not end with “God”.
The 7th day of Creation is blessing, sanctification and rest. Its numerical sequence is 7 words 31 letters, 14 words 62 letters, 13 words 46 letters, 1 word 5 letters.

We can first note that the sequence has 4 times 6 words in a row and that the number 6 no longer occurs after that.
Making symmetries and complementarities, by simple addition we obtain a simplified sequence with a repetition of the number 23 and its multiples 46, 69 complemented by a single sequence of 89 words.
The simplified sequence begins with a sum of 23 and ends with a sum of 69 + 46.
The reader can see this very easily by referring to figure 3 of the Beresheet Sequence.

The arrangement of the sequence on a circle with 32 sectors reveals a perfect hyper-symmetry, based on 5 times 69 and 89 corresponding to figure 4 of the Beresheet Sequence.

If we study figure 4 of the Beresheet Sequence more carefully we find a disconcerting precision for the sequencing of the words.

The whole sequence of the general cycle is consistent with the double property of 7.

The properties of symmetry revealed above corresponds to a first logic of creation based on the famous golden ratio that we find in nature and an unknown associated numerical sequence, discovered by this research.

In anticipation, we can note the fact that 89 is the foundation of creation and recreation. The number 89 coincides with at least 4 fundamental mathematical properties of which certain are unknown and one is related to the golden ratio. The enigma of 89 has a link with the enigma of 4 times 6 words at the beginning of the Brasit Sequence as seen previously.

The word “God” provides the first bearings for the foundation of creation and justifies the title of this study, Divinicode.

The previous figure 4 is based on the counting of the words of the text Genesis chapter 1 in Hebrew.
Figure 5 which follows the logic of figure 4 and the numerical data of figure 2 and figure 3.

Figure 5 represents the complete figure of the numerical data of the text analysis according to the sequencing of the word “God”.
There is nothing to add or remove. It is a simple counting data and not questionable, it is not a hypothetical intellectual creation.
Compared with figure 4, which represents the number of words, the number of letters corresponding to the words and the sequence of symbols defining the action made by God have been added; for example: God said, God saw, God did, etc.

Figure 5 completes the division of the text with the sequencing of days 1, 2, 3, 4, 5, 6. After day 6 the creation is completed, and the day 7 is devoted to blessing and sanctification. This is why day 7 is not in the creation sequence, it will be analysed later.
The sequencing of the days shown in figure 5 has a small offset from the text because the count stops at the word “God” included. However, the shift is constant for each day; it is 2 words of 5 letters corresponding to the expression “God said” in transliterated Hebrew “ViAMR ALEiM” translated word for word “and will say God”. According to this count the day 1 to 2 words and 10 letters more and the day 6 to 2 words and 10 letters less. For days 2, 3, 4, 5, the offset does not change the count.

Figure 5 thus gives the complete final sequencing of the text which makes it possible to search the various decryption of the creation. This figure 5 will allow us to discover the many sequencing properties as extraordinary as unknown and understand the mathematical laws that are the genesis.

The fundamental study of the sequences of numbers is extraordinary and astonishing. The next deciphering step will reveal some of this fundamental key related to logic units, 23, 48, 7, 11, and 37.